Buried beneath a stone monument overlooking the Scioto River he loved is Bill Moose, the Wyandot Indian whose native name was Kihue. Bill Moose died just two months short of reaching his 100th birthday. Read the story of this Native American born in 1837 who helped the immigrants settle the land; later he traveled the world with the Sells Brothers Circus, and he was a person we certainly would call eccentric today. 10,000 people attended his funeral! What a story!

BILL MOOSE: the last of the Wyandots

Dublin was not the site of a year-round Native American settlement, but plentiful game, rich land, natural spring water, and the Scioto River as a natural route for transportation made the area a frequently visited site.

In the late 1700’s, the Wyandots and Huron peoples roamed the land below the Great Lakes near the French and English outposts in Detroit. Although the Wyandots fought hard against the evenly matched American soldiers, they were not victorious. Despite agreements of the Treaty of Greenville, friction continued between the Native Americans and settlers in the new state of Ohio. By 1812, these animosities had escalated into full-scale conflict.

An American Army under General William Henry Harrison was sent to forestall an alliance of the Wyandots with other Indian tribes, which could further threaten the Americans. Harrison invited the principle chief of the Wyandots, Tarhe (the Crane) and representatives of other tribes to meet in Franklinton, the frontier village across the river from the newly created capital city of Columbus. Under the branches of a huge elm tree near what is now Mount Carmel Hospital, Harrison and Tarhe agreed on June 21, 1813, to fight no more. For the Wyandots, the war for Ohio was over with the Treaty of Greenville.

For the next 30 years, the land and property of the Wyandots in Ohio were increasingly encroached upon by settlements. It became apparent by the late 1830’s the Wyandots would have to move on. And on July 12, 1843, the Wyandots left their last settlement near Upper Sandusky, in a procession of 120 wagons and buggies, on their way to Kansas and then finally to Oklahoma.

One Wyandot remained and was a well-known figure in the Dublin area. His Wyandot name was Kihue, but he was known as Bill Moose.

Born in 1837, Bill Moose was a native of Wyandot County (the Ohio county where Upper Sandusky is located). Much of his childhood took place in Dublin and the surrounding area, primarily along the rivers and tributaries. Residents said he helped settlers clear land and frequently attended school. Though he commonly drifted about, Bill learned several trades, such as arrow making.

In 1878, Bill was hired by the Sells Brothers Circus as an Indian rider in their Wild West act. Bill had grown up with horses all his life and it was an easy way to make a living. The show management gave him the long headdress and the robe for the part and this was the first time Bill saw the conventional ceremonial dress — the white man’s stereotype. In the nine years with the circus Bill traveled to almost all of the states and in 1886 he went with the circus on an Australian tour. While at the Chicago Exposition he met with Buffalo Bill Cody and became good friends with Thunderbolt, one of Cody’s best Apache Indian riders. Colonel Cody also introduced Bill to the famous Apache warrior, Rain-in-the-Face, who was on loan from the reservation authorities. His travels took him over most of the western United States. One story reported it was during these travels that Bill received his eagle claw necklace as a gift from a Western Indian tribe.

He finally returned to the Columbus area in 1915 when he was 78 years old. His shack was on railroad property located near present day Morse Road but the railroad gave him permission to continue to live there. People commonly caught glimpses of Bill at the Wyandot Country Club, now the Ohio School for the Deaf (near High Street and Morse Road in Worthington), where he ate his free meals in full Indian regalia. During the daytime, Bill was seen either walking the railroad tracks, selling trinkets, or posing alongside the fenders of Model T Fords for Sunday tourists. Flossie Luton, an 81-year –old Dublin resident, recalls Bill Moose and this event: “People use to come out here or wherever they’d see him and get their picture taken; he’d put on his Indian stuff.” Bill lived a simple life. He cooked out of a single pot, and in the summer he slept on the ground. Flossie Luton remembers Bill Moose and his travels near Dublin: “I had seen him along the Scioto River walking around.” Occasionally, his shack was padlocked. It was not unusual to find Bill roaming the banks of the Scioto River with his blanket roll and rifle. He enjoyed nature’s calmness and serenity.

Old age drove Bill Moose to the Franklin County Home, leaving his shack as a playhouse for children.

On a summer Sunday evening in 1937 in 1937, just two months short of a century, the sun set on the last of the full-blooded native Wyandot Indians. Hundreds lined the Scioto River bank to view this touching historical event. (Actually, Rutherford Funeral Home reports this as the largest funeral they ever handled, with an estimated 10,000 to 12,000 persons attending.) Surrounded by a throng of mourners, a Columbus matron sang an Indian dirge while accompanying herself on a tom-tom. The Worthington mayor, James J. Thompson, delivered the eulogy, politicians spoke words of admiration, and a church choir sang comforting lyrics. The lead-lined bronze casket, complete with Indian designs, was a gift from the Belmont Casket Company. Bill Moose laid dressed in ritualistic costume, complete with bright new beaded moccasins, a necklace of eagle claws, and a rifle at his side. His wrinkled hands grasped a folded eagle feather. 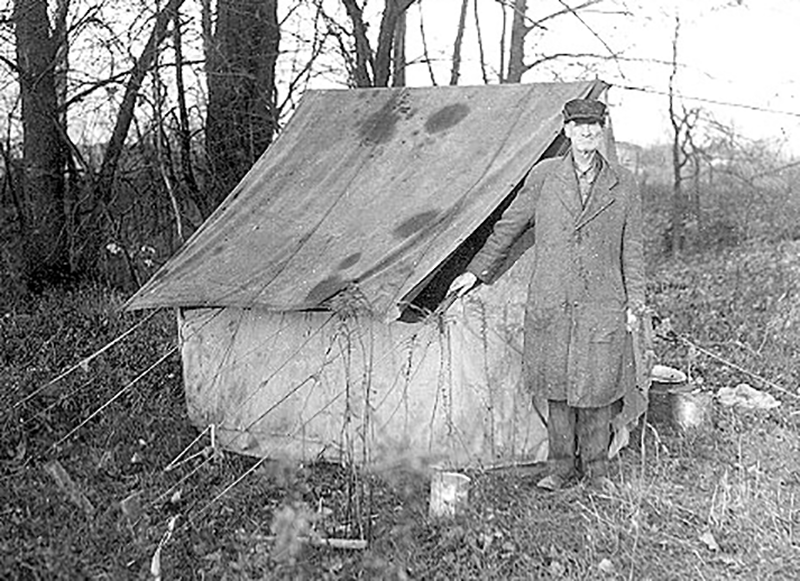 Today a monument, constructed of granite boulders stacked in a pyramidal shape, faces the peaceful Scioto River on Wyandot Hill four miles south of Dublin on Route 33. As a memorial to Bill, the monument depicts an Indian shaking hands with a white man, an Indian in full headgear, and a teepee. Directly behind the monument lays Bill Moose—a tribute to the Wyandot heritage and Dublin’s history. His epitaph reads:

“Bill Moose
Last of the Wyandots born 1837,
And whose death in 1937
Marks the passing of
The Indians from this territory.”

Bill Moose’s brief history, as told to the editor of the Worthington News, Worthington, Ohio:

I was born Sept. 9, 1837, eight miles north of Upper Sandusky, in Wyandot county, about 200 yards west of where Colonel Crawford was burned to the stake by the Delaware Indians and Simon Girty on June 11, 1782. I am a Wyandot Indian, and the sole surviving full-blooded member of that tribe. My father died Sept 9, 1871, aged 100 years. My mother died March 21, 1872, aged 106 years. Both are buried in the Indian cemetery at Upper Sandusky.

During my father’s lifetime at Upper Sandusky the Wyandot camp of Indians, which was located at that place, numbered about 400. Leatherlips, a friend of the white man, and a powerful and influential chief of the tribe, met his death June 1, 1810 at a point about 12 miles north of Columbus on the Scioto River road. Chief Pancake, who succeeded him, was the next and last chief of the Wyandots in this territory.

Our tribe were of a religious nature, and had their worship trees, under the branches of which they worshipped God, whom they called “The Great I Am”. They believed that good Indians would be rewarded in a future life and that bad ones would be punished. In 1816 our tribe was converted to Christianity by the Methodist Missionary, John Stewart (the son of free African parents), who was sent to preach the Gospel to them.

The Wyandot and Delaware Indians sold their reservations in 1836. They were transferred to Kansas, later to Oklahoma where the tribe so inter-married that there are now no full-blooded Wyandots to be found there. Twelve families, including our own, refused to move, and remained at their old camping ground.

For 9 nears I traveled with Sells Bros. Circus, and while with the show made a tour of the United States, Canada, and Australia. I have never been married, am a Republican, and cast my first vote for Abraham Lincoln. I attribute my long life to living close to nature and observe the custom of my tribe in sleeping out of doors during the summer, and one night of each month throughout the winter with only one blanket for cover. On my next birthday I will be 90 years old.